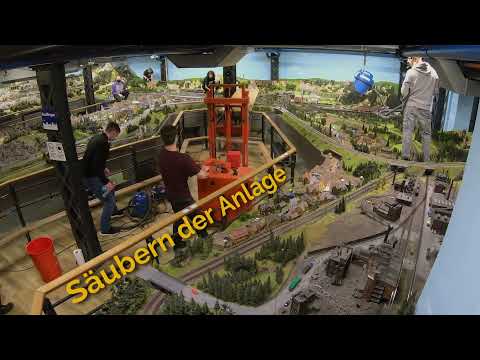 The Miniatur Wunderland in Speicherstadt Hamburg is the must-see for all railway enthusiasts, world-deckers, families, and every other visitor to Hamburg!

More than 1,100 trains with over 10,000 wagons as well as 137,000 trees, 289,000 figures, 10,250 cars, 47 airplanes in the air, 16,138 meters of track, 4,340 buildings and bridges were set up by more than 300 employees in over 990,000 hours of loving detail work. In this superlative model construction landscape, you will see realistic train operations completely controlled by computer. It even becomes day and night in the railroad world—and that every 15 minutes. Recently, the Miniatur Wunderland presents the HafenCity Hamburg and the Elbphilharmonie in miniature. Look forward to what is probably the world's smallest concert hall!

After four years of continent-spanning construction, a new era is dawning in Hamburg's most popular attraction: With Rio, a new warehouse building opens in Miniatur Wunderland Hamburg, as well as the glass bridge over the Fleet including the special exhibition "The World from Above". The 46 square meter model of Rio de Janeiro is the first part of the new South America section. And because they wanted to build the city from a South American perspective, the masterpiece was created together with the Martinez family of model builders in a suburb of Buenos Aires.
Over 60,000 hours of construction went into the famous Copacabana alone! And what would a miniature replica of Rio be without Carnival? At the push of a button from visitors, dazzling floats and samba dancers come to life. A spectacle that, together with the expansion of the new warehouse, cost a whole 1.5 million euros.

After Rio, the “Bella Italia” area in the Wunderland is one of the most up-to-date of the ten existing miniature worlds.

After nearly 3 years of construction and a total of 180,000 working hours, “Bella Italia” opened its doors in February 2018. On 190 m², visitors can immerse themselves in the many facets of Italy. Whether sunny beaches, historic buildings or mysterious ruins: “Bella Italia” offers all the images you would expect from a vacation in Italy. Of course, this includes parts of Rome including St. Peter's Basilica and the Colosseum, the seething volcano Vesuvius, and the sunken city of Pompeii. Discover "Bella Italia"!

The Harz mountains, with a seemingly endless ICE high-speed rail line and more than 130 trains, are just as much at home here as landscapes from Austria, Scandinavia, or replicas of famous Hamburg districts and sights from Hamburg's "Michel" to Hagenbeck's zoo and the world port.

The USA in Hamburg beckons with the desert and gambling metropolis of Las Vegas.

Here, a good 10% of all Wunderland lights are installed—around 33,000 of them. But the other areas are also scenically breathtaking: The Keys and Cape Canaveral, for example, merge directly into Las Vegas, and the Grand Canyon is separated from Mount Rushmore and Yosemite National Park only by a busy highway.

In 2005, the sixth section, Scandinavia, was completed. Particularly impressive here is the real-water basin in which 16 ships currently sail from miniature port to miniature port.

The construction section Switzerland is the most impressive section so far—it was opened in November 2007. Here, the focus is on the mountains with the 6-meter-high Matterhorn, which visitors can hike up to and enjoy the view once they reach the summit. Many highlights, such as the small chocolate factory with chocolate real ejection, or the open-air concert with 21,000 small visitors will amaze you.

And this is only the beginning! In constant construction at open building sites, the model world continues to grow from minute to minute. Additional sections are already planned up to the year 2028. Rio and Patagonia will be followed directly by Central America and the Caribbean, which are expected to be open to visitors by the end of 2024.

The history of our civilization

7,000 years of history have been recreated in just as many hours of painstaking handwork with many details and numerous handmade figures and buildings. The history of our civilization from 5,500 BC to 1942 is presented in eight dioramas. In addition to the Neolithic Age, the Middle Ages and the time of the French Revolution, there are also the eras of the two World Wars to marvel at. To illustrate this for the visitors, an ideal, non-real piece of land is shown as it probably looked in the respective epoch.

In 2021, the Miniatur Wunderland celebrated its 20th birthday. Some impressions of the course of the years can be seen here.

Currently, the redemption of the Hamburg CARD benefit is only possible at the box office.

The exhibition is open 365 days a year. As a guide, the following minimum opening hours apply (many days are open longer, some shorter).

Miniatur Wunderland at its Best
To offer
From 79.50 €

Learn more about barrier-free offers on our page www.barrierefrei-hh.de.

Miniatur Wunderland at its Best
To offer
From 79.50 €

Unusual museum experiences that you can only make in Hamburg.
More

Hamburg, Germany’s very own maritime metropolis, offers its visitors a fantastic stay, featuring some of the most famous, most exciting and craziest experiences imaginable.
Discover now

100% gruesome entertainment: Get up close to the dark side of the history of the Hanseatic city at the Hamburg Dungeon
More

Discover Hamburg's World Heritage! - In the authentic setting of a storage block from 1888, you can still experience the original atmosphere of the world's unique storage city, which was declared a World Cultural Heritage Site by UNESCO in 2015.
More

Hamburg has a new cultural landmark! The Elbphilharmonie Concert Hall represents an unprecedented synthesis of the arts - architecture, music and the unique location in the middle of the Hamburg harbour. More than 2.6 million guests have already attended over 1,000 concerts!
More