Ticket
To offer
From 55.90€*
Now save your ticket
Exclusively here!

„Get the audience out of their seats.”

„This energetic musical makes you happy.”

Save your tickets now Back in Hamburg after 20 years

MAMMA MIA! - The Musical in Hamburg

Stage Entertainment is brought the global success back to the Stage Theater Neue Flora in 2022. This means that MAMMA MIA! - The Musical returned to the Hanseatic city after almost two decades! MAMMA MIA! has already thrilled over 60 million people in 440 cities worldwide. In the meantime, the story has even been filmed in two top-class Hollywood productions.

The music of a whole generation packed into a rousing story

The idea of adapting the ABBA hits into a musical was born in 1994. MAMMA MIA! does not tell the band history of ABBA, but transports the audience to a Greek island. 22 super hits by ABBA such as "Dancing Queen", "Super Trouper" and of course "Mamma Mia" were woven into a charming, humorous and moving story - feelings of happiness guaranteed!

Friendship, family and a summer that changes everything

MAMMA MIA! is about single mother Donna who lives with her 20-year-old daughter Sophie on a small Greek island where she runs a taverna she built herself. While Donna copes with everyday life without a man in her life, Sophie longs for romance, children and a dream wedding in white. But before the young woman says yes to her beloved boyfriend Sky, she finally wants to meet her father.

When Sophie accidentally finds her mother's diary one day, she learns of three possible fathers who had an affair with her mother about 20 years ago. To finally put an end to the uncertainty, the bride-to-be unceremoniously invites the three potential fathers to the wedding ceremony on the island. When Donna's best friends from days gone by also arrive, the chaos is finally perfect. Donna has to face her past and the guesswork about Sophie's father begins. 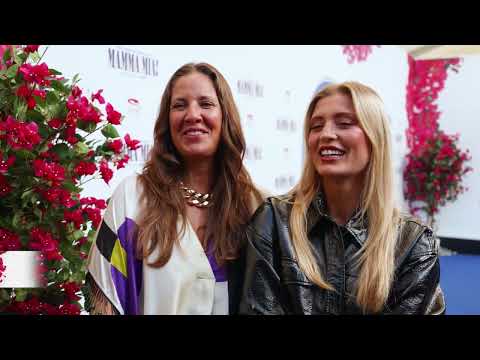 Unique production - cast and premiere of MAMMA MIA! in Hamburg

Just in time for its 20th anniversary in Germany, MAMMA MIA! returns to the Hanseatic city. At last you can watch the heart-warming mother-daughter story live on stage at the Stage Theater Neue Flora and sing along to ABBA's greatest hits.

The premiere performance on 11 September swept the approximately 1530 guests, including celebrities, off their feet. Swedish singer Isabel Edvardsson summed up the premiere with the following words: "As a Swede, it makes me especially proud that music comes from my home country and still makes so many people happy after so long". There was a standing ovation for the final performance. You can see first impressions of the joyful premiere in the video.

The lively main character Donna is played by Sabine Mayer, who has already appeared in Stuttgart and Berlin in MAMMA MIA! The understudy is Anna Thorén, also known from earlier MAMMA MIA! production. Also part of the dynamos is the tomboyish Rosie, whose role is played by Franziska Lessing. They also include the sophisticated Tanja, played by Jennifer van Brenk. The musical actress had originally auditioned for the part of Sophie - so now her dream of taking part in MAMMA MIA! is coming true.

No theatre fits this musical as well as the Stage Operettenhaus on the Reeperbahn.

For the perfect arrival

The Phantom of the Opera", one of Germany's most popular musicals, found its first home here from 1990 to 2001 and delighted over seven million spectators. Further successful musical productions such as "Dance of the Vampires", "Dirty Dancing" and "Tarzan" followed before the Phantom returned to the stage again in 2013. Until recently, the magical magic of Arabian nights blew through the picturesque theatre hall with the award-winning Disney production ALADDIN. Until 2020, the Stage Theater Neue Flora has been home to the arts musical CIRQUE DU SOLEIL Paramour.

Notes:
1. Save with the Hamburg CARD: Up to 10% discount for Hamburg CARD holders on selected performances and price categories. Here's how it works: Simply select the option "Save with the Hamburg CARD". The Hamburg CARD must be valid on the day of the performance. Proof of this must be presented at the theatre entrance by presenting the Hamburg CARD, otherwise the difference to the regular price must be paid on the spot.
2. The voucher can be redeemed at www.hamburg-tourismus.de/pakete or in the Service Center under +49 (0) 40 300 51 544 when booking a Hamburg Reisen package until 31.12.2022. The minimum booking value is € 400.00. The redemption conditions under www.hamburg-tourismus.de/coupon apply. Organiser: Hamburg Tourismus GmbH, Wexstraße 7, 20355 Hamburg